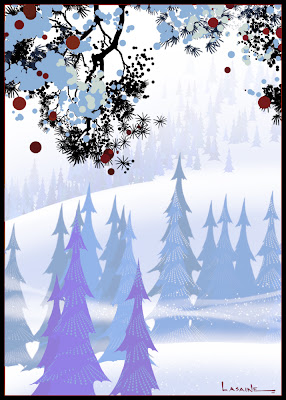 OK, you all must be sick of Surf's Up by now, so this will be my last Surf's Up post.

I'll end with my painting of the lead character, Cody Maverick. It's based on a drawing by our Character Designer, Sylvain Deboissy. The intent of the painting was to figure out what Cody (and all the penguin characters) would actually look like on screen.

Up until this point, we only had Sylvain's pencil drawings and marker comps, and there where a lot of questions about the penguins' finished textures. The biggest question mark was regarding feathers: should they have them or not? One concept that was gaining a lot of ground, was the idea that the penguins should look like their skin was made out of wetsuit material. Real penguins kind of look like they're wearing wetsuits anyway, and since our characters were supposed to be surfers...

The wet suit concept was intriguing, and the directors were definitely leaning in that direction. Partly because it was a fun idea, but also I think because they were afraid that a fully feathered character would look too busy on screen.

I, on the other hand, felt that when all was said and done, no matter how cool the wetsuit concept was, it would end up looking lame on screen...that anything other than a fully feathered character would just look boring...or at best, too cartoony...so I did this painting to sell the studio on what I thought Cody should look like.

In the end, this painting sold everyone on the feather idea...and the rest is history. 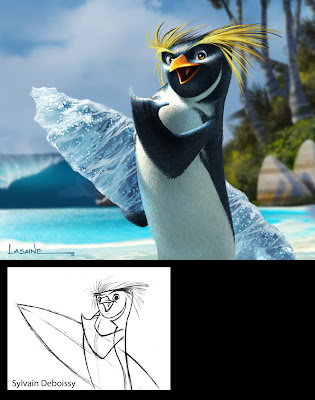