Welcome to my my Portfolio Page.

The Prince of Egypt

In 1994 I left Disney, and matte painting, to embark on a new path - one that I hoped would lead to Art Directing. I signed on with DreamWorks Animation to work on their first 2D feature, The Prince of Egypt. I started off as a visual development artist, and ended up as a co-supervisor of the background painting department.

The following images are a small sample of the hundreds of painting I did for the film. Some of them are pre-production design illustrations, and some are actual backgrounds. None of them are digital. Other than touch ups, color correction, and hieroglyphs, all the painting on POE was done traditionally. Our background department didn't go digital until our second 2D film - The Road to El Dorado.

As animation work tends to be a very collaborative process, the layouts for many of these paintings were done by some of my colleagues...in which case I'll do my best to remember who the artists were, so I can give them proper credit. 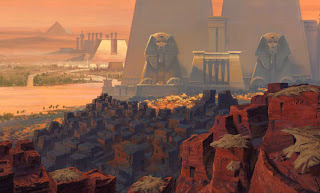 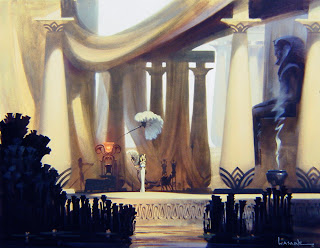 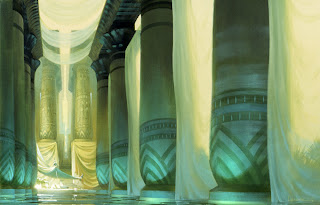 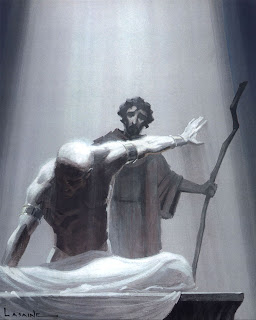 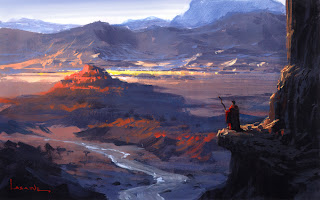 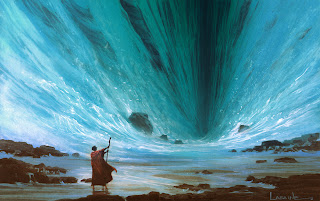 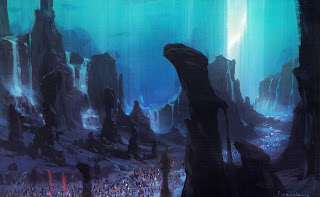 Again, these are fantastic, Paul. Can't wait for you to post these an you did! The main thing I love about this movie (other than that's one of my favorite biblical storyline) is the fresh design ideas and the epic scale. Very seldom you see these two elements in animated films, nowadays. These paintings are truly phenomenal and inspirational. Thanks for posting, my friend.

Your lighting and color painting skills are great beyond words. Thanks for the incredible inspiration.

Wonderful. This is the cup of coffee that I long for in the morning. Your work is such a beautiful blend of scope and scale with the emotion of color, a great mastery.

Ouch, my brain is hurting. (Too much talent, too much information...must break free.)

WOW...if these are just a small sample, then we are in for a treat!

Your brush strokes Paul are so dynamic and confident, that each piece maintains a such freshness and energy.

Welcome to blogland, Paul. Looking forward to seeing all the good stuff you'll be sharing on here. Take care.

Incredible. I dont even feel worthy to comment after this!

I am stunned and stupefied...humbled beyond measure. Your work is brilliant and is deeply inspirational. Thank you.

thank you sow much for sharing these.

...good lord. These are absolutely gorgeous and the matte paintings in the previous post have me staring. I swear I'd have thought they were a set; I kept wondering how they built some of those lovely sets when I was still a reluctant film student.

*happy sigh* Welcome to the land of the Blogmonster! Am so looking forward to any new posts - was directed here via Marcelo and am amazingly glad to have dropped by!

Sheesh. These are really inspiring. Thanks so much for posting these. I will stay tuned for more!

Wow... YOu know, The prince of egypt art book was the first animation book ive ever owned way back when!!! ITs one of the reasons i work in this business today!! Thank you!

It is a great day in the artblog universe!

Hi Paul, so nice to see you posting your fabulous work. Your amazing piece from Prince of Egypt of the workers on the scaffolding with the Sphinx in the background was what inspired me to join the Dreamworks team. I've been an admirer of your work ever since and now more artists will be inspired. Thanks so much!

Thanks for sharing your these amazing paintings !

I really love the colors and the design of The Prince of Egypt; you can feel the brush on the canvas in the backgrounds, and that's something I miss when I watch more recent movies.
I think this blog is going to become a great inspiration source for a lot of people ... !

- sorry about my english -

I guess i have been praying since the begining of the blogsphere for you to get on~ ^_______^ Love your paintings! i hope to see some of your LOTR watercolr work that's not in the books in the future as well~~~~they are amazing!

Paul, It is so wonderful that you have a blog put together. Your work displayed here for Prince of Egypt left a big impression upon me and was a great influence for me to get into this business, after college. Still is one of my favorite development books. Welcome to blog land. Really amazing work!!!

geez, you're work is phenomenal. thank you for sharing, sir.

thanks for sharing these with us...you will live forever thru your art...I must pursue that also...I will make it!

Hey Paul, thank you so much for stopping by my blog and thanks for the comment on "Marla", I'm glad you liked it ;)
This blog of yours is becoming scary..as Marcelo says, too much amazing stuff, too many things to look at, I'm confused! :D

Take care and talk to you soon!
Alessandra

I have only one word:

I remember seeing these over at Dreamworks when Prince was in production and they blew me away then-I felt like this stuff was redefining animation, bringing a sense of scale and scope that hadnt been tried before. They havent lost any of their power. Completely amazing!

OH my god, these are impressive, you see that movie is one of my favorites.... you are truly my hero!

Unbelievably beautiful. Your paintings were some of my favorite concept paintings from the movie. Thanks for sharing!

thanks for exist !!:D
your work is AMAZING!!
wow, thanks for posting these concept, I will wait for other wonderful paintings!!
compliments..

wow.... im in awe here! Truly inspirational Mr Lasaine! I have a looonnnng way to go to get anywhere close to this level of painting!

Paul, these are beautiful!! so dramatic and epic in scale. Cant wait to see more!
-John

Mind boggling body of work!
Thanks for putting them out there:]

Thank you so much for these amazing paintings Paul!!!

Oh yes I remeber those days! Your the man!!!

You have been an artist inspiration to me for years. Can't tell you how long I stared at reproductions of your work. You're one of the very best.

You do amazing work Paul! You're just wicked at capturing the scale of an environment and putting such atmosphere into it too.

Paul I can't tell you how excited I was when I saw that you have a blog!!! I've been waiting for YEARS to see more of your work on the internet, but to no avail... until now :-P And even after all these years, your art still holds up and blows me away. Thanx for starting this blog, keep it up!

Thank you, for all your work, but especially for this particular movie. We really need people like you these days. Thanks a lot.